Internet connection is becoming a bigger and more integral part of our day-to-day transactions. It’s no longer just about work or entertainment, it’s embedded into every element of our lives. From small applications such as using online maps to larger systems like high-speed transport connectivity – everybody uses connections in one way or another.

For this reason, government bodies have taken notice and recognise connectivity as a product and service of necessity, not luxury. Municipal wireless networks are one way local authorities have begun to provide internet access to their populations, improving people’s lives and driving countless benefits.

What are municipal wireless networks?

A municipal wireless network is a connectivity network funded and implemented by government bodies. It refers to a wireless network that is available either citywide or covers an expansive area of the city, via Wi-Fi for example. Using wireless mesh technology, a municipal network enables a vast number of devices and people in a region to connect, with little or no disruption to inhabitants during deployment.

Local government bodies are taking interest in developing these networks because of their benefits to society on the whole. Reliable internet and consistent access to connectivity is quickly becoming a necessity for most of the population. Not only do people rely on it every day, but it helps improve infrastructure, services, and the efficiency of how we function as a community.

For example, our Liverpool 5G Testbed demonstrated how Fixed Wireless Access (FWA) connections can transform healthcare in the UK, optimising services and reducing costs for government.

In order to power this and many other applications within the realms of public safety, emergency services, and connected enterprises, local authorities are interested in funding municipal wireless networks to connect large areas and drive the development of connected Smart Cities.

One common  misconception about municipal wireless networks is that they don’t provide the security of a private network. But in reality, the security of a network depends on the providers and users of the network. There are a plethora of technologies and security options available that can be implemented to make a network secure. In fact, most networks come with these measures built in – and enabled.

Take Wi-Fi routers or even laptops as an example. The option to include a password is readily available, but it’s up to the user whether to include it and how secure to make it. Essentially, the level of security can be customised. When people’s data is involved, as it is in healthcare applications, additional security will be implemented to protect this data. 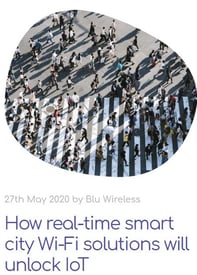 What are the advantages and disadvantages of municipal wireless networks?

Governments are deploying these networks for the social and economic benefits to the community rather than for profit. This means areas that need it most will be given priority and networks deployed as widespread as possible.

This isn’t always possible when operators are the only providers. Cost inefficiencies and other barriers such as geographical location can stand in the way of widespread connectivity. This means many cities can end up with inconsistencies where some areas either get little or no service and generally have been furnished with lower quality networks.

Take the example of health and social services and the numerous new technologies and societal benefits that can be derived from a reliable, wireless connectivity network. Blu Wireless is working with the UK Government to do this in Liverpool with wireless mesh networks.

As we know, the goal of the NHS is to provide top quality healthcare for the public, but this has to be delivered in a cost-effective and efficient way. Without funding or prioritisation of network accessibility, new technological initiatives are hindered, and organisational efficiencies undermined.

Statistically, the people who need these services the most are those in lower income areas, who often can’t afford internet connectivity. If governments continue to prioritise the roll-out of wireless networks and applications for wireless technology, these people will gain access to it.

Most countries have restrictions on state aid. This means that the government doesn’t always have the resources or infrastructure to fund a nationwide project.

Municipal wireless networks will therefore be deployed in high-priority areas rather than everywhere. So all-pervasive connections can be achieved as a public or enterprise service, but it won’t replace home WIFI.

While having free, municipal networks is a great advantage to the community, it could also mean that this comes with a decline in quality. In the private sphere, companies are competing and so naturally the quality and performance of the service increases.

In contrast, having municipal bodies overbuilding where private operators already provide a service may push them to improve their own service. Not only would the public have access to free, public networks, but there would also be high-quality private connections in the same area.

How can we deploy municipal wireless networks?

Municipal networks won’t overtake or replace the private networks that already exist. Instead, the two will exist in tandem. Private companies can continue to provide the core network and municipal wireless networks can act as a pervasive back-up throughout cities.

This is due to the fact private operators are already providing high-quality service through fibre, broadband, WIFI and 4G/5G which has established a solid connectivity infrastructure that the government can build upon. This way, the government doesn’t need to fund a complete citywide rollout of technology that meets every application’s needs, but it can fill the gaps where the current network doesn’t exist.

This is an important use case where Blu Wireless’s technology provides a lot of benefits. Our wireless technology delivers the fibre-like quality connection that private networks promise but at a cost that government funding can accommodate.

If you want to find out more about how Blu Wireless is contributing to the future of connectivity, get in touch.