Smart Cities at one time seemed like a futuristic idea that wouldn’t be realised for generations. Now the technology is not only starting to emerge, it’s being put into action.

Although there won’t ever be one type of connection that dominates the Smart City ecosystem - a heterogenous combination of networks is essential to making it work – wireless networks are driving tangible progress and development in the space.

The following piece covers which technology is going to build Smart City networks and where mesh networks fit into this plan.

What is a Smart City and what are some of its criteria?

The idea of Smart Cities has risen in the last few years, but it’s a tough concept to define because the technology is determined by its applications – of which there are many.

At its core, a Smart City is about connecting all the people, information, resources and networks that make up a fast-paced, efficiently functioning city. Everything from sanitation to traffic light systems can be linked to form part of a larger interconnected ecosystem.

Essentially, a Smart City is an ecosystem of widespread connectivity that must have high bandwidth, fibre-grade outputs and be extremely reliable to support its applications.

The multitude of applications within a Smart City is what spurs on demand and development within this realm. Applications like autonomous vehicles and public safety fall under the concept of Smart Cities and they require consistent, citywide connections to perform in an effective and timely way.

Many of these applications also require huge amounts of data to support their video-centric functionality. Take autonomous cars for example, they use cameras and video to ‘see’ the road and cars around them. Therefore, 4K quality video would need to be available everywhere throughout the city and road systems.

But where is the demand from these applications coming from? Key stakeholders in Smart Cities include both enterprises and individuals. The introduction of all-pervasive connectivity to service daily city life is one obvious benefit to the public. However, business growth can also be hugely empowered when there is access to better internet connections and innovative Smart City applications.

While these stakeholders will be using the applications, local governments and large operators are the two primary providers of Smart City solutions. Implementing the relevant technologies would help rebalance the internet provision and resulting connections across a city. Done correctly, this would mean everyone could access a balanced level of connectivity, and experience the same standards.

What are the network technologies behind Smart Cities?

There isn’t just one type of network technology that these applications will rely on in Smart Cities, there are many working together to create a core network; such as fibre, private networks, 4G/5G and Wi-Fi.

Primarily, physical fibre networks are fundamental to the interconnected ecosystem. But while they provide extremely high-quality connections, they often aren’t available where people need them. To supplement these gaps in connection, wireless network technologies can be used in tandem with fibre with both technologies connecting to the core network.

For example, business often use private network solutions to gain the extremely high performance, reliable broadband and rapid links that they rely on within the enterprise. Fibre can meet these needs, but at the cost of lengthy planning and construction to fit underground cabling.

Wireless technology can then act as a high-quality, cost-effective and easy-to-deploy substitute when fibre is not economically or geographically viable. Blu Wireless’s mmWave technology is a key, market-ready example of how this technology can be deployed to complement fibre networks.

As for the general public, people aren’t connecting to fibre through their devices – instead they use wireless connections. Access to the network is provided via 4G and 5G by individual operators, with either public or private Wi-Fi being overlaid on top as the third layer of internet connectivity. 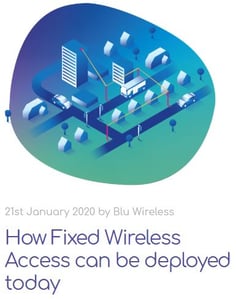 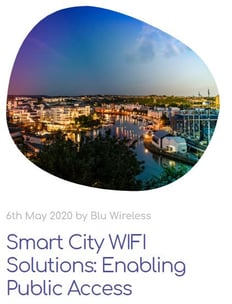 How do wireless networks work?

There are two ways to create a wireless network - star networks and mesh networks - and they resultantly have very different types of connections. While each has their benefits and use cases, mesh networks are the technology that will help make Smart Cities a reality.

A classic network would see a range of devices or access points connected to one central hub. This is called a star network, and functions with one core technology, such as fibre, powering multiple points.

As with everything, depending on the use case, there are some disadvantages to this type of network. Firstly, the central hub needs to power separate points through individual connection routes which requires extremely high throughput to achieve.

Secondly, with only one way in and one way out, these connections can be easily obstructed. For example, if the connection was blocked by a fallen tree, or became faulty, that connection would completely collapse as there is no alternative route. While this isn’t a permanent fault, it would require a significant amount of time and investment to get it back up and running.

A mesh network, on the other hand, is designed to resolve these issues within the network itself. The central hub has various pathways to each connection point. By eliminating the need for any individual point of contact, it creates a blanket connection over the network.

This makes the network much more robust than a star network, as connections can easily reroute if one point is blocked, eliminating bottlenecks and obstruction issues. Essentially, a mesh network provides more reliable and high-quality connections.

What problems are solved by wireless mesh networks?

Their consistency, lower cost, and reliable connections will drive the development of Smart City Wi-Fi solutions and become a complementary element to the overall backbone network.

Having a wireless network integrated into the Smart City backbone network is necessary because laying fibre everywhere is simply not an option. It’s too expensive, would take too long and cause too many disruptions, such as roadworks, to deploy citywide. Plus, it can often be put under strain by over usage, sometimes jeopardising reliability.

So where complete fibre solutions are not viable, mesh networks are needed to be integrated to seamlessly provide high-quality wireless connections and alleviate these issues. Where fibre requires digging and lengthy engineering, a wireless mesh network uses a series of nodes, categorised as distribution and client nodes, that can be easily and quickly installed onto existing street furniture such as streetlamps or posts.

Like the mesh networks, these nodes use robust line-of-sight wireless communications to transfer data. Sophisticated technology allows them to adapt their connections to avoid any obstructions ensuring the network remains robust.

This means mesh networks can be rolled out in a timely manner, making Smart Cities a reality in years, not decades.

What is the future of wireless mesh networks?

As a critical technology for empowering Smart Cities, mesh networks are expected to have extremely widespread and critical applications, with the potential to be deployed prevalently throughout cities. This includes Fixed Wireless Access (FWA), connected health, connected vehicles and more.

Because they’re expected to be such an instrumental technology; the next steps for wireless networks is to perfect them. This is because wireless networks can be more open to obstruction than hardware, however this is already being addressed through mesh network technology. Development of these networks is focused on ensuring that wireless connections work seamlessly and can continually overcome obstructions easily.

What Blu Wireless technology can be used for Smart City solutions?

Blu Wireless’s technology can support both the core backbone network and the branching applications of Smart Cities. It’s a wireless technology designed to be complementary to fibre with equally powerful connections, be extremely scalable, and cost-effective.

Our Fixed Wireless Access (FWA) and wireless small cell technology has important Smart City use cases, such as providing high performance links for enterprise networks and connectivity for connected and autonomous vehicles (CAVs). In fact, our Evaluation Kits can enable users to easily set-up their own high-performance connections, furthering the cause for Smart City application deployments everywhere.

We also develop sophisticated mesh technology which ties all this together. This is what will truly enable Smart Cities and the connection of people, devices, and networks in a region.

Get in touch to find out more about our wireless technology and how it’s driving the future of connectivity.